"neighbor to neighbor: Family music for Sandy Relief"
is now available AT Bandcamp and CDBaby!

Help spread the LOVE!!!
Buy a download giftcard now
to give As a gift to your loved one!

Support Hurricane Sandy relief efforts while singing & dancing your way through the day to the tunes on this AMAZING recording.
So many wonderful musicians have donated their talent to this compilation --  and 100% of the proceeds go to Sandy Relief!

WATCH THE NEW VIDEO PROMO FOR "NEIGHBOR TO NEIGHBOR" !

Please join the Neighbor to Neighbor facebook page for updates about events, relief organizations we're partnering with, how the funds raised are helping out, and other Sandy relief & recovery news.

Who will the "neighbor to neighbor" funds help?

We are delighted to announce that funds raised by The Neighbor to Neighbor Project will go to two separate organizations that are helping Sandy victims:  The Action Center in Far Rockaway, Queens, and Camp Bulldog in Lindenhurst, Long Island. A long-time community center serving Far Rockaway, The Action Center became a hub providing essentials to storm-ravaged victims of Hurricane Sandy from the moment the flood waters receded. In addition to providing regular programming to serve community members, The Action Center continues to be a lifeline to families and individuals still trying to get their live back in order.  Camp Bulldog is an entirely volunteer grass-roots effort that developed in the days after the storm, when several area residents stood on the street corner offering hot soup to their less fortunate neighbors.  Now operating out of a heated tent in Shore Road Park (with several containers FULL of donated supplies), Camp Bulldog remains an essential relief and resource center for Sandy victims from Lindenhurst and neighboring villages.  Read about Camp Bulldog & Neighbor to Neighbor in LI News

How "neighbor to neighbor" came about... 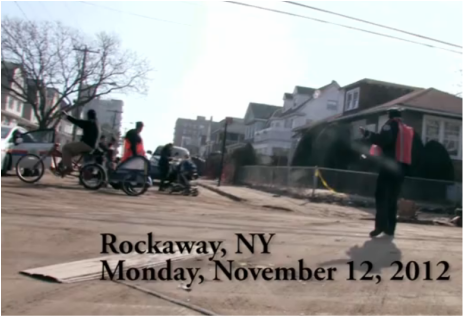 Click to watch a video of the day that inspired the Neighbor to Neighbor Project.
Two weeks after Hurricane Sandy wrought its devastation, Story Laurie & family (joined by fellow performer Ameila Robinson of Mil's Trills) traveled from the Catskill Mountains to the Rockaways to bring relief to children & their families in the form of music & stories, supplies and home-baked goods from Delaware County. It was clear very quickly that a well-coordinated grass-roots effort (involving both neighborhood people and Occupy Sandy volunteers) was providing a very important lifeline of supplies to the Rockaway area.

Inspired by the many citizen volunteers we met that day, and recalling how our downstate neighbors had come to our region's aid after Hurricane Irene in 2011, we formed the Neighbor to Neighbor Project for Sandy Relief. The Neighbor to Neighbor Project seeks to support similar grass-roots relief efforts through the collaboration of the MARK Project, the project's fiscal sponsor, and the numerous volunteers who have dedicated their time and talents to ensuring that the devastation of our Neighbors in Rockaway and Long Island   (where Laurie grew up) are not forgotten.

Thanks to all the wonderful fans who came out to The Sandy Cause benefit concert on December 22nd featuring:
Uncle Rock; Story Laurie & Ira McIntosh; Grenadilla; Ratboy Jr.; Professor Louie; and 8-year-old Noel Fletcher
It was a great way to kick-off the compilation and raise some funds for the cause, all while having tons of fun!