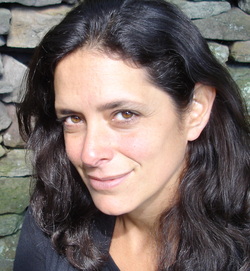 Laurie McIntosh (aka Story Laurie) is a storyteller, songwriter and singer—an enchanting entertainer who transports listeners of all ages to lands near and far with her delightful renditions of folk tales and vibrantly entertaining, socially conscious songs for kids and families. Since making her home in the Catskill Mountains nearly 20 years ago, Laurie has performed for audiences of all ages at schools, libraries, festivals and historical societies.

Most recently, Laurie merged her love of story, song and home-grown goodness in Groovin’ in the Garden, her new CD.  Produced by children’s music guru Dean Jones (Dog on Fleas), Groovin’ in the Garden glows with 16 super-sunny tracks. Besides the wonderfully offbeat interpretations of some reliable classics—a tuba-fueled take on “Shoo-Fly Pie and Apple Pan Dowdy” and a boogie-in-your-socks romp through “The Hokey Pokey”—the disc brings a bushel full of Laurie’s patently catchy and witty originals. Several of these, the clever sing-along title cut in particular, focus on a theme that brings folks of all walks together and helps everybody:  community gardens.

For nearly two decades, Laurie has been the storyteller-of-choice throughout the Catskills and Hudson Valley. A passionate performer, Laurie also has an extensive career as a storytelling coach and workshop leader.  She has received numerous grants for her work training children as storytellers, as well as for conducting community oral history projects in both Delaware and Ulster counties.

She produces programs to rave reviews from teachers, school administrators—and students—including “Journey to Ellis Island: An Immigration Story,” a performance and residency using the saga of Laurie’s own grandmother to explore America’s culturally rich immigrant background; “Flying on the Wings of Our Words,” a residency workshop that introduces kids to the magical art of storytelling; and “Around the World in an Afternoon,” a musical storytelling adventure that incorporates folk fables and songs from cultures across the globe.

At turns hilarious and serious, Story Laurie magically glides from one character to the next, employing her exquisite vocal skills, gestures and facial expressions. With the fluid, highly animated way Laurie inspires classes and audiences, it’s no surprise she’s won the praise of some of the greatest names in her field. Among them are folk legend Pete Seeger and acclaimed storyteller Jay O’Callahan, the latter calling Laurie “a vibrant, creative performer who moves with the beauty of a jazz note.”

Whether via the contagious, lesson-filled tunes on Groovin’ in the Garden or performing for, and with, students or families, Story Laurie makes learning, creating—and singing!—fun for all.